There's nothing worse than getting an order of bone-in wings in Ardmore with hardly any meat on the bones, or, worse, getting them tossed in a mediocre wing sauce. At It's Just Wings in Ardmore, we take pride in our bone-in wings — giving you tender, juicy, saucy chicken in every bite. Start your online order with It's Just Wings in Ardmore, OK to get a full serving of bone-in fried or smoked chicken wings in your ideal sauce or rub flavor, and we'll throw in a free order of seasoned curly fries.

Order Your Perfect Plate of Bone-In Wings in Ardmore 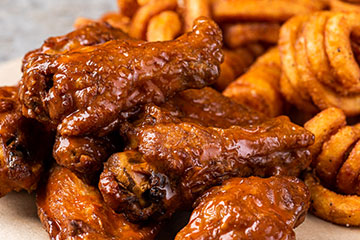 Bone-In Vs. Boneless Wings: Which Is Better?

In addition, choosing bone-in or boneless wings depends on if you like white meat or dark meat chicken. White-meat chicken typically has a lean, mild flavor, while dark meat is typically more juicy and flavorful. But no matter how you like your wings, you can get your wing order from Ardmore It's Just Wings cooked perfectly.

At your local It's Just Wings in Ardmore, we don't stop at traditional or boneless chicken wing options. We're also making the best order of smoked wings around. But we don't just stick some chicken over an open fire pit. We cook our smoked chicken wings for hours over pecan wood to ensure the nutty and sweet flavor of the wood gets into every single bite. The result is a tender and juicy wing that's packed with deliciously smoky flavor. All that's left to do is toss it in one of our signature sauces or rubs for the perfect chicken wing meal.

No matter if you prefer smoked or traditionally fried bone-in wings, Ardmore, OK It's Just Wings has your perfect buffalo wing order. With delicious signature sauces and rubs to pick from and a decent helping of free curly fries with every order, you can get your next lunch or dinner delivery in Ardmore knowing you'll get good, quality food and a lot of it. Start your perfect bone-in buffalo wing order online and have it delivered straight to your home in Ardmore.