Get the Best Wing Sauces at It’s Just Wings in Morrisville, NC

With tons of house-made wing sauces and rubs to choose from, It's Just Wings in Morrisville, NC has the hot wing flavors you crave. Are you more of a traditional Buffalo sauce person? Our Buffalo sauce is perfectly mild with tons of flavor. Or, go for a more unique taste with our Santa Fe sauce. No matter what flavor you get, It's Just Wings in Morrisville has a wing sauce or rub to suit your chicken wing craving. 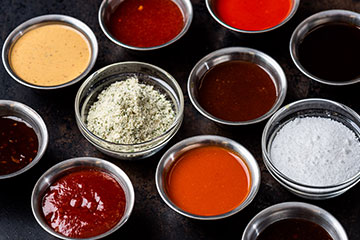 If you’ve been trying to hunt down the best wing sauce flavor in Morrisville, our house-made honey sriracha sauce might just be it. And if you’re seeking something creamier with a bit of a kick, then you need the Santa Fe sauce, with notes of cilantro and spicy jalapeño. And we can't ignore tradition, which is why we took the classic Buffalo wing sauce and made it better. Put it up against other big-name wing restaurants and see what you think. But we're sure that once you've had ours, you won't ever look back.

Get the Best Spicy Wings in Morrisville, NC

If you like a little sweet with your heat, we've got the sauces for you. From our honey chipotle and mango habanero wing sauce to our mouthwateringly-tender honey sriracha wings, you'll get the right combination of spicy-sweet flavors you've been hunting for in Morrisville, NC.

Even if you've had other honey sriracha sauces, you've never had our. This savory wing sauce glides over your palate with spicy and sweet flavors. But don’t forget our Hawaiian-inspired spicy pineapple teriyaki sauce. With a perfectly tropical taste that's sweet and citrusy and just a bit of spice, you're in for a tasty sweet and spicy treat.

If you'd like to take things easy and go for sauces that give you a bit of spice without the flame, look no further than our homemade honey chipotle sauce. Our honey chipotle sauce is made through a seamless mixture of mild chipotle pepper and sweet honey for a tasty sweet heat flavor. And if you want something a bit different, you should try our sweet and savory apple BBQ sauce or our tasty garlic parmesan sauce. With so many new flavors, you can bring something new to the table — literally.

Get the Best Dry Rub Wings Near You in Morrisville, NC

Choosing which dry rub flavor you're craving is difficult. But when the best dry rubs for chicken wings are all at one restaurant, ordering your perfect plate of wings is simple. Order your wings with a mild cajun spice, our deliciously cool ranch dry rub, or a classic lemon pepper dry rub. With dry rubs that are this finger-licking good, we doubt you'll need a napkin.

At It's Just Wings in Morrisville, our lemon pepper rubbed wings are the perfect balance between zesty citrus and crisp black pepper, while the cajun spice rub is guaranteed to please with its Louisiana-inspired flair. And if you're a ranch-dipping person with your wings, why not have that cool ranch taste tossed right onto your wing? Less time dipping means more time eating — it's just science.

Satisfy Your Sauce Cravings from Morrisville It's Just Wings

Are you hungry yet? Start your wing order online for delivery in Morrisville, NC to get the sauces you crave delivered straight to you. And if you're struggling to pick which sauce you're craving, get extra sauces on the side of your order to do as much dipping, dunking, and flavor mixing as you'd like. Or, if you're just a sauce fanatic, get a little extra for your free huge side of seasoned curly fries. Crush your wing craving with It's Just Wings delivery or pickup in Morrisville, NC.