The Best Boneless Wings Delivery or Pickup in Goldsboro, NC 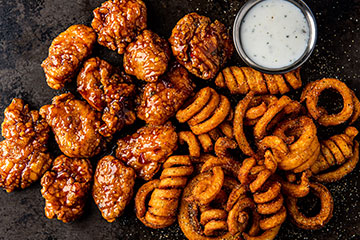 Your Goldsboro It's Just Wings has a deep love for hot wings. And while bone-in chicken wings may get most of the attention from wing lovers, we share an equal love for our boneless hot wings. We start with big portions of fresh, white-meat chicken that's perfectly breaded. Then, we deep-fry your boneless wing order to perfection and coat them all in whichever sauce or rub suits your fancy, making sure we coat each boneless wing for the best flavor experience.

With plenty of wing sauces and rubs to pick from and free curly fries on the side with each order of wings, your Goldsboro It's Just Wings is certainly not lacking in flavor or food. No matter you like your order of boneless wings tangy, citrusy, spicy, or even a bit sweet, you can order your ideal plate of boneless wings while getting totally full in the process.

Boneless chicken wings aren't wings with the bones taken out. That would take forever. Boneless wings are actually chunks of tender, white-meat chicken breasts. But these tasty boneless chicken cutlets are definitely qualified to earn them their chicken wing title. After all, when you want wings, you think of tender, juicy chicken tossed in a delicious wing sauce or dry rub seasoning. That's precisely what the boneless hot wings are at your local It's Just Wings in Goldsboro. Get your order of boneless wings tossed in one of our house-made signature wing sauces or dry rubs, and you won't question boneless wings again.

Imagine it — you're chilling at your house in your favorite pair of sweats binging your newest favorite show. Now picture that scenario with a delicious plate of boneless chicken wings covered in your choice of sauce or rub with a liberal amount of curly french fries on the side. That's the ideal you after getting boneless wings delivered from your local It's Just Wings in Goldsboro. Start your order online, choose your ideal wing sauce or dry rub, put in your home address, and we'll bring it right on over.

And since you're here, you might as well order an order of delectable deep-fried Oreo® County Fair Cookies with chocolate sauce on the side. Because honestly, why not. After all, dinner or lunch delivery (or pickup!) in Goldsboro should not be so complicated, which is why we offer one side and dessert with our single menu item — hot wings. Keep your next lunch or dinner delivery order simple with killer wings at stupid prices from your local It's Just Wings in Goldsboro.